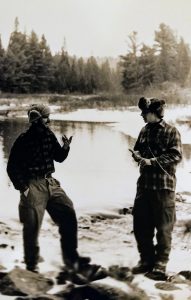 Gardoqui, Kate Ehrenfeld Gardoqui and Matt Wild made their way to the Seacoast of Maine. Dan and Matt had been instructors at the Wilderness Awareness School for many years, where they were mentored and inspired by Jon Young, the school’s founder. Through her teens and twenties, Kate worked hard as wilderness canoe guide, designing rites of passage programs while also serving as a teacher in under served communities. In late 1999, the three founders coalesced around a vision and Kate’s tremendous generosity turned that vision into reality.

Together, with their small but mighty staff, the founders launched their first youth program, teaching a handful of home-schooled children on Trish and James Taylor’s farm on Frost Hill in York, Maine. On weekends, the team lead adult tracking workshops in the mountains and along the seacoast. The founders worked tirelessly at growing the young organization and, in January of 2004 became a registered 501(c)(3) tax-exempt non-profit.

At this time, Dan was named Executive Director while Kate served as an early board member, then later an advisor – all the while sharing and refining the teachings of WPP to diverse groups of teens in the world of public schools and to train teachers in these methods. Matt and his family decided to moved to Rhode Island after he earned a position as a first responder near his home town. 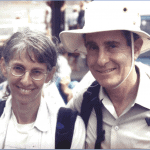 For many years, White Pine operated out of Dan and Kate’s home and land in Cape Neddick. Known as Wood Frog Hollow, the Gardoquis graciously shared their land with thousands of children and adults over the course of two amazing decades. During this time, Joan & David Ehrenfeld (left), two prominent ecologists, made numerous major gifts that allowed White Pine Programs to thrive, develop new programs and establish an endowment. We’re forever grateful for their support.

Recognized Today as our Founding Director, Dan left White Pine in August of 2019 to begin a new chapter in his career, and Heather Campbell, a former board member and Piney parent, was hired to lead the organization. While Dan, Kate and Matt have moved on from White Pine, some of the early team, board members, volunteers and staff remain.

Surviving as a non-profit during the early years was far from easy and making it to our 20th year in 2019 was an incredible achievement.  From the humble beginnings of six kids and six staff in 2009, the organization has grown to be a well loved and trusted, industry leading provider of nature connection programming. 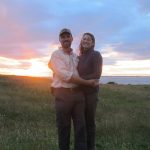 As we find ourselves in 2021, our organization now has 18 year-round employees, runs programs over 270 days per year and reaches ages four and up. Programs vary throughout the year: summer camp, a year-long school day program for ages 4 – 15, monthly weekend youth programs, after school programs in three communities, wildlife tracking for adults, various family programming and more. Having said goodbye to Wood Frog Hollow, today, our programs happen in partnership with various land holders: the Zacharias family, Town of York, Southeast Land Trust, Kittery Land Trust and York Land Trust. We are so fortunate that these generous land holders value our programming and are incredibly grateful for their partnership.

We also continue to be grateful for our founders, our staff, our volunteers and our community of supporters. Without them, White Pine could not achieve its mission of providing transformational experiences that forge personal resilience, nurture community, and promote lifelong care-taking of the natural world.